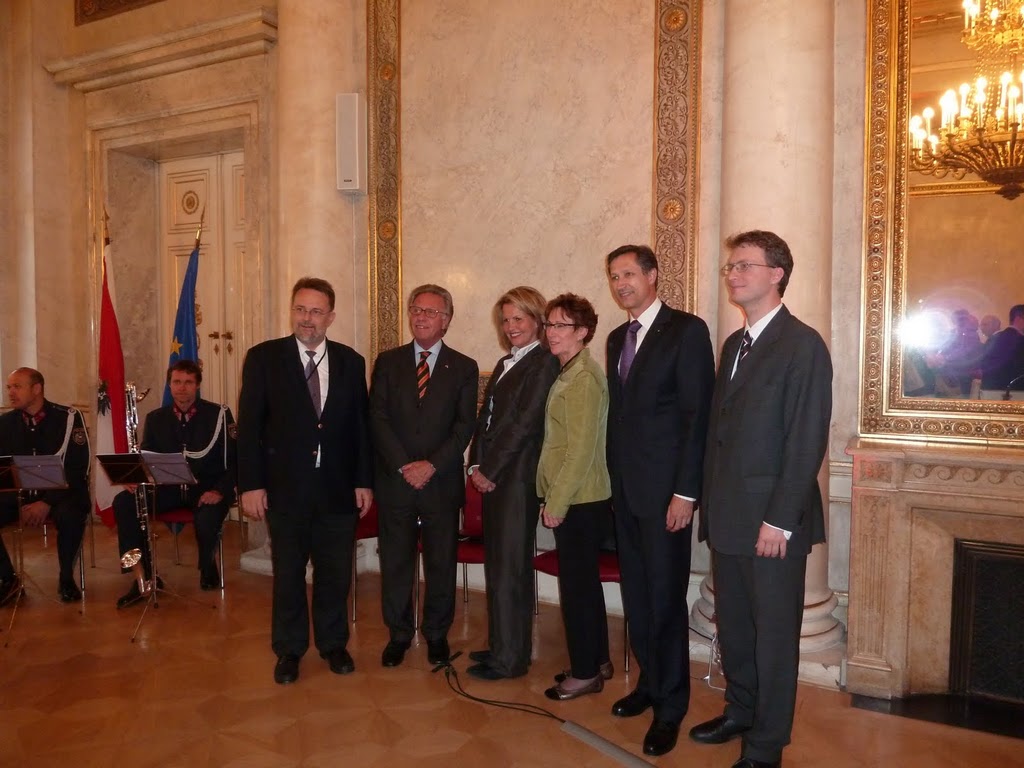 Ráðstefna á vegum innanríkisráðuneytis Austurríkis og Evrópuráðs 12.-13. maí 2011 í Vín. Í móttöku innanríkisráðuneytis; frá vinstri Robert Stein frá ráðuneytinu, Gianni Buquicchio forseti Feneyjarnefndar, Herdís Þorgeirsdóttir fulltrúi í Feneyjarnefnd, Donetta Davidsson formaður landskjörstjórnar Bandaríkjanna, Dr. Mathias Vogl ráðuneytisstjóri og Gregor Wenda frá innanríkisráðuneytinu.
Dagskrá: http://www.venice.coe.int/docs/2011/CDL-EL(2011)004prog-e.pdf
(The eighth European Conference of Electoral Management Bodies “Elections in a changing world“ was organised by the Venice Commission in co-operation with the Federal Ministry of the Interior of the Republic of Austria on 12-13 May 2011. The issues which were addressed during the conference included the recent elections in Member States, as well as a range of issues concerning the role of modern technology and social media in elections, the transparency of the electoral process and the latest developments in the field of electronic voting.
Prof. dr. Herdís Thorgeirsdóttir, EWLA’s president and member of the Venice Commission gave a presentation on how the modern media influence the electorate. She is pictured here at a reception at the Ministry of the Interior in Vienna. From left to right: Mr. Robert Stein from the Ministry of Interior in Austria, Mr. Gianni Buquicchio, President of the Venice Commission of the Council of Europe, EWLAs President dr. Herdís Thorgeirsdottir, Ms Donetta Davidsson former Under Secretary of State and Chair of the Election Assistance Commission in the United States, dr. Mathias Vogl, director general for the legal affairs of the Federal Ministry of the Interior and Mr. Gregor Wanda from the Ministry of the interior.
Dr. Thorgeirsdottir called attention to the need to protect “net neutrality”, the principle of equal access to information online in line with the Council of Europe Committee of Ministers’ Declaration adopted at its 1094 session on 29 September 2010 and the need to promote the public service value of the internet, its openness, and integrity and adopt the necessary measures in accordance with the
rights guaranteed by the European Convention on Human Rights.
She emphasized the necessity of raising  awareness of the electorate, candidates, EMBs on the potential dangers of the use of social network sites.
Around 80 participants from national electoral management bodies of the following
countries attended the conference: Armenia, Austria, Azerbaijan, Bosnia and
Herzegovina, Brazil, Estonia, Finland, France, Georgia, Germany, Hungary, Republic of Korea, Kyrgyzstan, Latvia, Lithuania, Mexico, Moldova, Netherlands, Portugal, Russian Federation, Serbia, Slovak Republic, Slovenia, Switzerland, Tajikistan, Ukraine, United Kingdom, United States, Uzbekistan as well as members of the Venice Commission and representatives of the Parliamentary Assembly of the Council of Europe, the Congress of Local and Regional Authorities of the Council of Europe and representatives of the Council of Europe’s Directorates General of Democracy and Political Affairs and the Head of the Council of Europe Office in Vienna.
Also represented were the Organisation for Security and Co-operation in Europe/Office for Democratic Institutions and Human Rights; the United Nations; International IDEA, and the Inter-American Union of Electoral Organizations (UNIORE). Several international NGOs active in the electoral field also participated in the conference.)