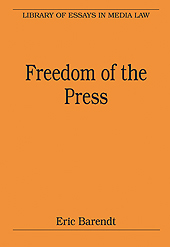 Bringing together the most seminal articles written by leading international experts, this volume discusses all aspects of freedom of the press. The papers in the first part of this volume discuss the meaning of press freedom and its relationship to freedom of speech, while those in the second part discuss the extent to which self-regulation is a satisfactory alternative to legal controls. The essays in parts III and IV explore the various solutions adopted in the USA and in some Commonwealth countries to balancing the freedom of the press and other media against the laws of libel and privacy. They discuss, among other issues, the question whether courts should apply the same constitutional principles to privacy actions as those developed in libel law and how far celebrities are entitled to claim privacy rights when they are photographed in public places.