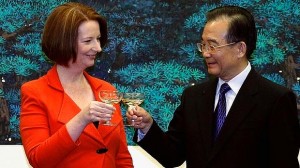 Often referred to as “Grandpa Wen” by state media, the premier is one of the few senior Chinese politicians with the popular touch, usually the first to appear at the side of victims of earthquakes or other disasters as a kind of consoler-in-chief. But there have long been rumours that his decade in the job has brought more tangible benefits to his immediate family, and now the New York Times has put a figure on it.

The more than $2.7bn in controlled assets reported by the newspaper are held not by the Chinese premier himself, but by his wife, mother, siblings, children, and their in-laws. The figure though may not come as much of a shock to Mr Wen. A WikiLeaks cable dated 2007 quoted a source as saying the premier was “disgusted” by his family’s activities.

But whether he disapproves or not, the investigation shows that much of the wealth has been accumulated in areas of the economy over which he has direct authority. Mr Wen is not the only senior leader over whom that kind of suspicion lingers, but given his position, his public standing and his own championing of the anti-corruption cause, the Times report will be seen by the authorities here as highly sensitive and potentially damaging.

Bloomberg’s website is still being blocked after it published, back in June, a similar expose of the family wealth of the man tipped to be China’s next leader, Xi Jinping. It may be a while before readers in China get to see the New York Times online again.